For the starter, 50% must be hot. What temperature is used to define hot?

The temperature for food needs to be respected according the hygienical rules. A difference is made between a warm preparation and hot preparation. That means that a warm salad is not considered as hot dish. The dish must be servable on preheated plate and 50% of the dish more than 48 °C.

What is the minimum temperature the hot finger food must have?

The temperature for food needs to be respected according the hygienical rules. A difference is made between a warm preparation and hot preparation. That means that a warm salad is not considered as hot dish. The dish must be servable on preheated plate and 50% of the dish more than 48 °C.

Is the temperature measured in the box or only as soon as the hot food arrives at the jury?

No. The temperature is taken at the pass at the same time of serving. The food must be sent on order and not 15 minutes before.

There may be 6 cooks and 2 helpers in the box. A helper is the dishwasher. What exactly is the second helper allowed to do apart from polishing plates?

Nothing! "From the start of the competition on, one helper is allowed to be in the kitchen serving as a dishwasher and for the cleaning of the working tables and kitchen machines."

Can helpers carry finished products to the fridge and a chef puts them away, or can only the chef put the products in the kitchen and then into the fridge?

The Helper acting as dishwasher is not allowed to touch any food or preparations. Only the Chefs put it into the fridges.

Will there be marshals at the pass during service to coordinate the service with the team?

Yes. A lot of teams gave positive feedbacks after the last World Cup. That’s why we decided to offer the same service to the teams in the restaurant.

Does a "helper" do the announcements for the 3-course service or a "chef" from the competition kitchen?

In the kitchen box, 6 chefs and the dishwasher are allowed during the whole time of working. For the service the second registered helper is allowed to do the announcements.

How should the advertisement "helper" dress?

The helpers must be dressed different as the chefs and clearly be recognizable. Nevertheless, does all the actors in contact with food destinated for consumption be dressed according to the HACCP rules.

Can rechargeable devices be brought along (additionally)?

No. Dehydrated yes, but not formed or put in a form etc.

Can vegetables/fruit be dried and partially shaped (crust or wrap) ?

Can vegan meat substitutes be brought along?

Yes (Seitan Quorn, Tofu etc). But in natural form without any process of preparation.

What about homemade substitutes (e.g. beetroot ham) if they are processed further?

Yes, as the meat substitutes, but in natural form. Not cut marinated or similar preparation. It must be considered as ingredient for further preparation.

Are home-pickled fruits, vegetables, buds and spruce tips allowed if they are further processed?

Yes, but this strictly applied. Vegetables, fruits, potatoes, onions cleaned, peeled, washed, raw, not cut (exception for vegetables where seeds have to be removed). For example squash, but only allowed to be cut in halves.

Is Kombucha, homemade syrup (spruce syrup) allowed if it is further processed?

The Kombucha is considered as a wine or other liquid. It must be shown to the jury for tasting as the stocks or fruit pulps. Just the natural acid taste without any mix or flavor is allowed.

Can meat/fish trimmings be brought in frozen? E.g. for farce (faster freezing).

No. The judges need to check quality and freshness of the products.

Is it allowed to bring cleaned and rinsed oyster-shells into the competition to serve a finger food in/on?

As all the serving utensils must be brought by the teams, the oyster-shells will be considered as any other utensils like small cup, bowl or plate.

Is it permissible to bring raw scallops in their own broth into the kitchen?

SHELLS - Cleaned and taken out of its shells, ie: mussels, scallops, oysters

At the Chefs Table on Fire, 2 chefs also serve the guests during the service with starters, main courses and desserts? Do 2 chefs have to support or is one chef enough if he could also do it alone?

As mentioned in the rules. One chef is assisting the guests for serving (plating) on the buffet. He or a second chef is slicing the remaining 4 portions from the main pieces. The decision to put one or two team members belongs the teams organization.

Do the jury members sit with the guests together at the same table?

No! Certainly not. Judging is done in a separated room.

Are there specific guidelines for choosing the theme at the Chef’s Table? How precisely or freely can/must the theme be interpreted, and does it have a negative effect on the evaluation if the jury does not consider the chosen Theme to be well fulfilled?

The theme is the common thread of the whole menu. One the basic idea of the Chefs table for juniors, was to valorize young chefs work and efforts on competition, and to bring the out of the anonymity. That’s why the communication with guest and explain the birth of the creation is very important to transmit the understanding to the guests. The jury will not evaluate the content and sense. Nevertheless, the theme must be recognizable.

How does one (1) electronic device with multiple uses count, for example, (Kitchen Aid with pasta, spiral/sheet cutter, meat grinder attachment, etc.) As one (1) device or more devices?

At the Restaurant of Nations, the team manager is only allowed to stay outside the kitchen and is not permitted to participate in any way. Is this the same at the Chefs Table on fire?

This concerns the preparation time. He must stay away from the team to avoid any communication. During Service. The team manager is allowed to call the announcing for services. He/she can only wipe the plates and is not permitted to place garnish, sauce, or decoration on the plates.

What’s the weight of a finger food?

Main pieces on plate: End piece still desired, e.g. Coat that is completely closed because we are supposed to cut the end pieces open to the end?

The main pieces are as its name, the end piece of a terrine or preparation. This must be the continuity of the sliced cuts.

May mixed rye flakes or rye grains be brought in or do they have to be in their natural state?

Cereals could be brought in as flour is also allowed. This is a raw ingredient not processed.

Fruit purees or a stock can be brought ready-made. Can sugar be added to fruits to remove liquid from them?

Dried fruits are allowed... Does that only apply if you process them on site?

Yes! The can be brought in as basic ingredient, but not as a final garnish

As spice mixtures are allowed does Vanilla pods may be scraped out?

Can a puff pastry be brought ready to use?

Yes! But its recommended to do the last 2 tours on site before cutting

FINGER FOOD: Buffet service on separate platters. The platters may have holders, but not larger than the platter rim.

Does the finger food have to stand on its own? (e.g. for the cornett/corn lollipop).

The base you use to plate the finger food is up to you. The guidelines says; different platters to make it easier for the guests to reach the food from their sitting place, and the finger food must be eatable with one hand and one bite. Never mind if you use lollipop, china, or …….

When serving the platter, is it a must to serve with a fork/spoon (one-handed) or is it also possible to use a mini-pallet or something similar?

Never mind, on a buffet, the guests must be able to serve themself (one handed) with in one hand the plate.

How far is the theme mentioned (e.g. spring) and its implementation included in the evaluation?

The theme is the common thread of the whole menu. One the basic idea of the Chefs table for juniors, was to valorize young chefs work and efforts on competition, and to bring the out of the anonymity. That’s why the communication with guest and explain the birth of the creation is very important to transmit the understanding to the guests. The jury will not evaluate the content and sense. Nevertheless, the theme must be recognizable.

How long does the petit four stay before trying it?

As in real service in a restaurant, petits fours stay on table at the end of the menu and can take up to an hour. All depends on the speed of the clients.

Is there a weight specification for the petit fours or just a total weight of the menu, as stated in the guidelines?

This are the requirement from the pastry chefs in CCC according with the organizer! • Fourteen (14) pieces x 3 varieties = 42 pieces • Two varieties (2) are of the chef’s choice. • One variety (1) must be vegan. • One of these three types of petits-fours must be made without the use of any molds. • The petits-fours will be displayed on a serving tray. • The petits-fours will be presented to the guests by the pastry chef. • Ten (10) pieces of each will be served to the guests and Four (4) pieces of each will be served to the jury.

In addition to sponge, biscuit and meringue, can I bring other types of dough (puff pastry, “Baumkuchen”), not sliced?

No. The puff paste is recommended to do the last 2 tours on site before cutting. All other must be made on site. Only sponge, biscuit and meringue are allowed as long it’s used for further process.

What means any use of molds? Does that also mean cutting forms etc. or just solid silicone molds?

That means that one of the three petits fours must be cut and not formed in or by a mold.

If the showpiece is assembled on site, is the working method during assembly also evaluated? 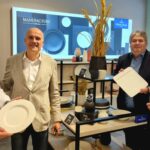 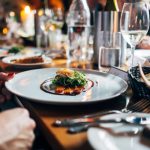